My Land Rover’s 300Tdi engine is very badly broken, and apparently it’s all because of the failure of the ‘P gasket’. This part, which costs £3.24 according to a web search I’ve just done, forms a seal between the engine block and the mounting bracket which holds the water pump, alternator and various other things. It’s supposed to play its part in keeping the coolant inside the engine where it belongs. Trouble is, sometimes it doesn’t. And when the cooling water escapes on the motorway, the engine overheats before you’ve even got time to look at the the temperature gauge. This is an object lesson in the damage an engine can do to itself when it overheats badly.

The first I knew about it was that the engine suddenly lost power and then died altogether. I was only able to drift to the hard shoulder in a cloud of steam and smoke. Once cool, the engine would restart but ran badly, making an odd tapping noise, and the Land Rover’s top speed was about 40mph. It’s no racing car, but it’s not supposed to be that slow.

Cutting a long story short, the head is now off the engine. Here are pictures of what’s inside.

Firstly, cylinder number 4. I think this is the reason that the engine stopped: the piston got so hot that it started seizing in the bore, scoring it badly. The score lines are more than just visible, they’re perceptible with a fingernail, too. 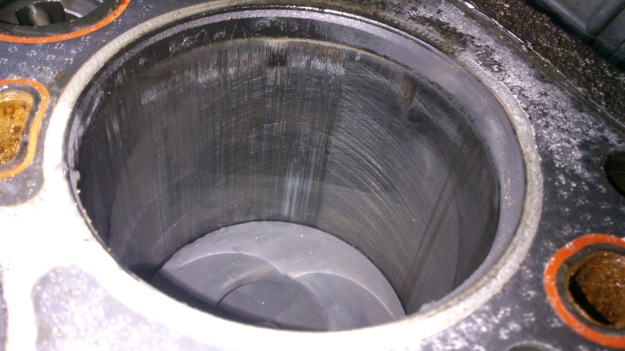 The other cylinders look OK, but one bad one is enough.

Sadly the head gasket has also failed, between cylinders 2 and 3: 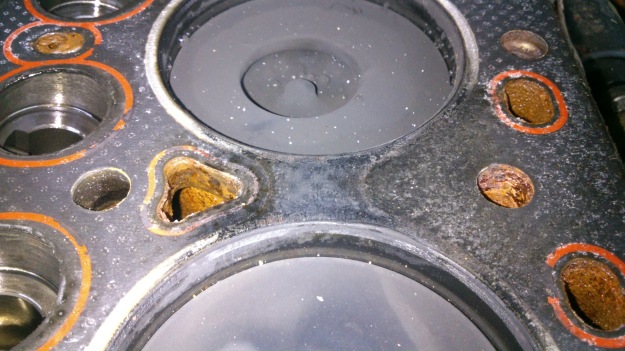 That would explain the loss of power. Considering that only one out of the four cylinders was in anything like normal condition, it’s amazing that it still ran at all.

I’ve now spoken to several people who’ve said that if a 300Tdi engine has been overheated this badly, the head will be wrecked as well. The search for a replacement engine is now on.