No, this is nothing to do with plumbing. It’s much drier than that.

Today I wanted to screw some resistors to a heatsink. The resistors have 2.5mm mounting holes, so I looked in the M2.5 fasteners drawer and found plenty of screws but no nuts. That’s not going to work. And I haven’t got any self-tapping screws that small, and self-tapping screws are a bit horrid anyway. Unless…I could tap the holes in my heatsink so the screws would screw directly into them. That would be easy if I had an M2.5 tap, but I don’t. Only 6BA, M3, M4, M5, M6, M10x1.0 and 1/4″ UNF, since you ask.

What to do? Well, the heatsink is aluminium, so fairly soft. And the screws are steel, so harder. I decided to try making a tap out of a screw. I attacked one with a cutting disc on a Dremel, like this:

If you try this at home, keep your fingers out of the way. Oh, and switch the Dremel on. It works better like that. The result was a screw with a couple of flutes in the end of the thread: 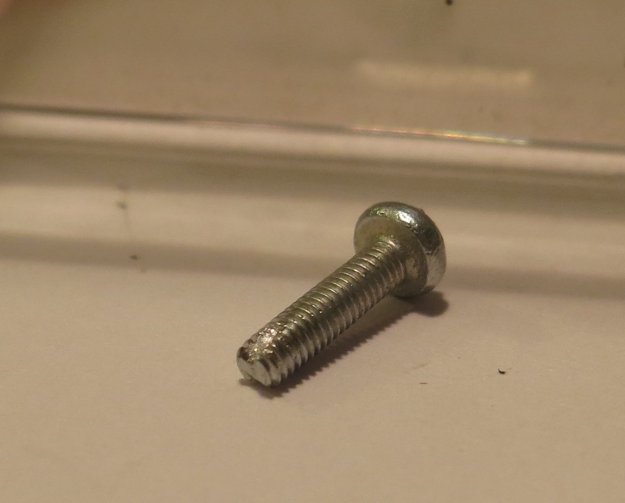 I took the photo after the screw had been used to tap half a dozen holes, so it’s a bit mangled, but you get the idea.

Just use the screw like a tap, turning it gently into the hole, reversing every now and again to break the swarf. It worked a treat, and all six of my holes take M2.5 screws very neatly. If only they lined up with the holes in the resistors. Sigh.

Action shot of tapping in progress. You can see the sharp edge of the flute which helps to cut the thread, and the authentically-mangled head of the screw.

2 thoughts on “Tapping a hole without a tap”