In a previous article, I described briefly the Tektronix 7000 series of oscilloscopes and some that looked awfully similar from the Soviet Union. Having the technical documentation from both, I decided to do a comparison and see what, if anything, the designs owed to each other, bearing in mind that the soviet version appeared at least 7 years after the US one.

I chose the vertical amplifier plugin for comparison. The soviet one is called the Я4C-90, and looking at its specifications (2 channel, about 100MHz bandwidth) it seems very similar to the Tektronix 7A18. Here are the two side by side: my own 7A18 on the left, and a picture of an Я4C-90 from the internet on the right. 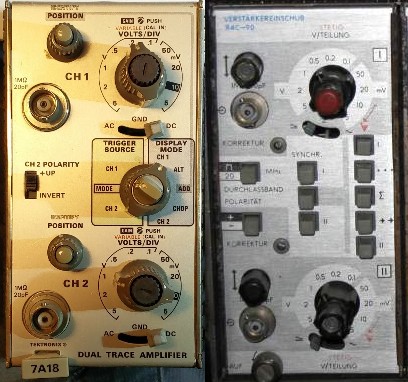 They have a lot in common. Where Tek have used rotary switches for the trigger source and display mode, and a slide switch for the channel 2 polarity, the USSR used pushbuttons for those functions. In addition, the Я4C-90 has a 20MHz bandwidth limiting switch, like the (200MHz bandwidth) Tektronix 7A26.

I’ve cut-and-pasted sections from each of their technical documentation in order to be able to compare the designs. Let’s start at the front end: the attenuator.

First, Tektronix. They have used x100, x10, x4 and x2 attenuators with switches arranged to bring them in to circuit for the various deflection settings, from 5mV/div to 5V/div.

Now the USSR. They have used x100, x10, x4 and x2 attenuators with switches arranged…oh, hang on, it’s exactly the same. Even the switch combinations are the same. And whoever drew the diagram had exactly the same idea as the Tektronix drawing office when it came to representing the switching.

Well, let’s move on to the main amplifier.

Tektronix have used a FET input stage followed by a couple of bipolar differential gain stages, with an emitter follower on the output. And the USSR? Well, the input stage is visible on the right hand side of the attenuator diagram, and it’s practically identical to the Tek one even down to some of the resistor values. They didn’t have Tek’s matched dual FETs so had to make do with two individual ones matched on test. Let’s look at the rest of the stages.

Oh look! Two differential bipolar gain stages, just like Tek. I can only see two noteworthy differences: the gain control acts after the second stage rather than after the first, and the USSR version doesn’t have the emitter follower on the output.

Next comes the channel switch, which selects between channel 1 and channel 2 to feed to the mainframe.

To get high performance here, Tektronix actually designed and made their own ICs. The channel switch, U270 in the diagram, uses a 155-0022, which appears in all sorts of places in Tek equipment where switching or addition of differential signals is needed. That’s followed by a transistor stage, Q280/Q380, which drives the mainframe. Here’s the soviet equivalent.

Fancy that. There’s a special module, MC1, which does the switching. An internal circuit diagram  is also present, which looks suspiciously similar to the rather ambiguous diagram of the Tek 155-0022 chip. The soviet module is actually a 04КН009, which has been extensively reverse engineered by Erik Baigar, see his site here. Interestingly it’s a hybrid module rather than an integrated circuit, though it clearly does the same job.

Interesting here is the frequency compensation network. The Tek design has, between pins 1 and 16 of U270, a couple of RC networks, with one adjustment to get the high-frequency response of the stage right. Conventional enough.

The USSR design has a whole load more stuff in the same position, between pins 1 and 14 of MC1. In addition to three RC time constants with three adjustments (!) there’s a curious arrangement involving a thermistor R4 and a pair of varicap diodes D1 and D2, which seems to do some temperature-sensitive frequency response adjustment. It could be very creative design, but it smacks of desperation to me: the 04КН009 module is probably more sensitive to temperature variations than the Tek chip.

The final transistor stage before the output isn’t shown on the USSR diagram. It has a separate page to itself. It’s a little more complex than the Tektronix 7A18 because it has the 20MHz bandwidth limiting function. Now, there’s a Tek plugin, the 7A26, which has a 20MHz bandwidth limiting function. Just for fun, let’s look at the circuit diagram of its output stage.

It has an extra pair of transistors and some filter components (C860/L860/L880) connected by a diode switching arrangement. What did the USSR do?

Well I never! An extra pair of transistors and some filter components (C34/L1/L2) connected by a diode switching arrangement. Great minds think alike.

There are differences, of course. The ones I’ve noticed are:

The architecture of the Я4C-90 is, barring minor details, identical to the 7A18. It’s close enough for me to say that it’s a straight copy which has been adjusted to suit the soviet semiconductor technology available at that time. If imitation is the sincerest form of flattery, the engineers in the USSR must have been big fans of Tektronix.