Back in 1970, Tektronix introduced their ‘7000’ series of oscilloscopes. Their clever plug-in architecture offered unmatched performance and flexibility, and they quickly became an industry standard. They were ubiquitous in well-heeled electronics labs in the 1970s, 1980s and into the 1990s, at least in the US and UK. I’ve still got three examples in regular use because they do things that modern scopes struggle with. You want 10 microvolts/division sensitivity? Grab a 7A22 plugin. Want to see the same signal in the time and frequency domains together? No need to go and buy a shiny new ‘Mixed Signal Oscilloscope’. Just plug in a 7L12 spectrum analyzer. Need a 100MHz differential amplifier that can deal with 500V common-mode? No problem: Use the 7A13 plugin. All this stuff is more than 40 years old but still does a state-of-the-art job. 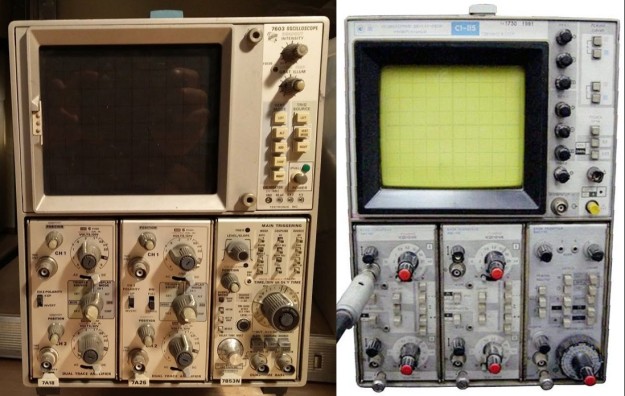 Notice any resemblance? Same panel layout, same arrangement of plugins – even most of the knobs are in the same places. Let’s just say the soviet design seems to have been heavily inspired by the Tektronix one.

The soviet scopes don’t appear to have been as common in the east as the Tektronix ones were in the west, but there are some survivors in private hands. There’s a page describing the range on the TekWiki here, which includes links to some owners’ pages. However, there has been very little technical documentation available, and I’m fascinated by the technology: how much of it was copied, and how much was original?

Whilst looking for something else on allegro.pl recently, I came across a set of manuals for the C1-112 mainframe with Я4C-90 Y amplifiers, Я4C-91 timebase and 2K11 calibration plugin. They include circuit diagrams and other technical information. Bidding wasn’t exactly fierce and I got the lot for 5zł. The nice thing about them is that they’re in German, which is easier for a western audience to understand than Russian or even Lithuanian. Sadly they’re not quite the works of art that the Tektronix manuals are, but these even include the calibration certificates!

I’m very curious about what’s inside. In a future blog post, I hope to compare the Tektronix and soviet designs side-by-side and see what they have in common.