There are many ways of connecting sensors and devices to a Raspberry Pi. One of the most popular is the I2C bus. It’s great for devices which don’t need to transfer too much data, like simple sensors and motor controllers, and it’s handy because lots of devices (up to 127, or even more) can be connected to the same pair of wires, which makes life really simple for the experimenter. I’ve mentioned using the I2C bus in another blog post, because sometimes a bit of software fiddling is needed to get it to work.

Recently I’ve been working on a project involving various devices connected to a Raspberry Pi. Some of them use I2C. The project is based around a breakout board I designed for the Multidisciplinary Design Project at Cambridge University Department of Engineering, in which students collaborate in teams to put together a robot. The breakout board is shown next to the Raspberry Pi in the photo below. 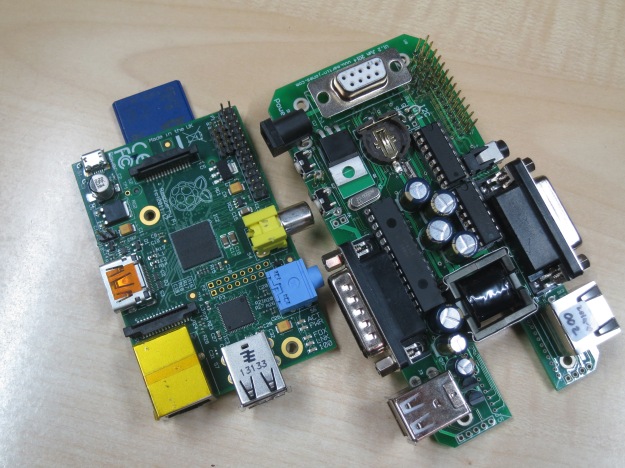 It fits on top of the Pi, and has lots of useful features including a student-proof power supply, real time clock, accelerometer, space for a Zigbee module, analogue inputs, diagnostic LEDs and four motor driving outputs, all wired to convenient connectors.

The analogue inputs and motor outputs are implemented by a PIC microcontroller connected to the I2C bus. The software for the PIC was written by an undergraduate several years ago. It works well, but seems to have some odd habits. I found that it would apparently work, but sometimes an attempt to read data from the PIC would just fail, or return wrong data, and sometimes data would get written to the wrong register. At first I suspected a wiring problem, but examining the SDA and SCL signals with a scope showed nothing wrong. I tested another device on the same bus – a Philips PCF8575 I/O expander – and it worked perfectly every time. That narrowed the problem down to the PIC. Since there was nothing I could do about the PIC’s software, I had to find a workaround.

I spent some time experimenting with where the communications seemed to go wrong. Reading from an I2C device usually involves two separate operations on the bus. The first one tells the I2C device which register address we want to read, and the second does the actual read. The diagram below shows the sequence. The ‘control byte’ in each case sends the address of the I2C device (0x30 in this case) plus a bit indicating read or write.

I found a pattern in the failures. From time to time, the write operation which sets the register address would fail, reporting ‘I/O error’. After that, reading the data would return the wrong value. I modified my code so that if the write operation failed, it would retry a couple of times before giving up. It turned out that retrying was always successful, if not on the first attempt then on the second. However, the data read would still return the wrong value. The value returned was always the address of the register I wanted! It seemed as if something was getting stuck somewhere in the I2C system. Whether it was in the Linux drivers, or the PIC software, I don’t know, and I didn’t spend long enough to find out. My assumption is that the PIC software is sometimes just too busy to respond to the I2C operations correctly.

I tried the retry strategy again, and it turned out that the second attempt to read the data byte always got the right value. The algorithm to read reliably looks like this, in pseudo-code:

In practice I was using the Linux I2C dev interface to implement this. Yes, it’s a bit of a nasty hacky workaround, but it did get the communications working reliably.

There was another device I wanted to talk to: an Arduino Mini running a very simple sketch to return some sensor data. This also used the I2C bus. There are handy tutorials about how to get an Arduino to behave as an I2C slave device, like this one. The I2C interface is implemented nicely by the Wire library. Implementing a slave involves responding to two events: onReceive and onRequest.

This worked most of the time, but after a few thousand transactions, it would appear to ‘lock up’ and ignore any attempt to change registers – it would always return the same register, and in fact no more onReceive events were ever generated. Of course, it turned out to be my fault. When reading data in the onReceive event code, it turns out to be important to make sure that data is actually available, like this:

That solved the problem. It’s annoying that reading non-existent data can lock up the whole I2C interface, so watch out for this one if you’re using an Arduino as an I2C slave.